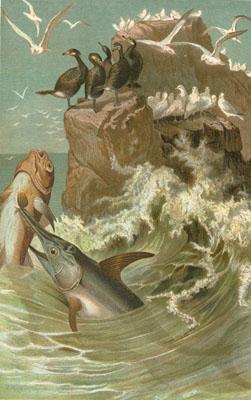 Swordfish are large, highly migratory, predatory fish characterized by a long, flat bill. They reach a maximum size of 177 in. And 1,400 lbs. They are named after their sharp beak resembling a sword that allows it to cut through the water with great ease and agility. Contrary to belief the sword is inot used to spear but instead may be used to slash at prey inorder to injure and make prey an easier catch. Mainly hte swordfish relies on its great speed, capable of reaching speeds of up to 50mph.