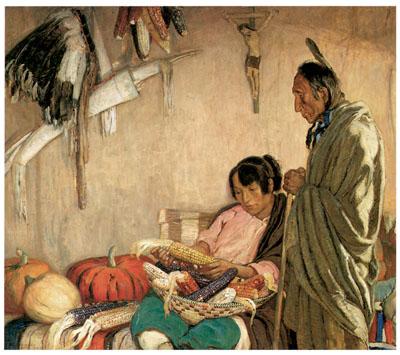 Oscar E. Berninghaus 1925 - This painting shows an old Native American couple gathered around a basket of corn along with plenty of other types of crop at their side, while even an old Jesus crucifix hangs from the wall. Oscar E. Berninghaus (1874-1952) was known particularly for his paintings of Native Americans and the American Southwest. Berninghaus attended Washington University and at the St. Louis School of Fine Arts studying illustration, printmaking, and lithography. He first traveled to Taos in 1899 on a painting commission for the railroad, and returned each year for long periods thereafter. He was a founding member of the Taos Society of Artists in 1915 although he continued to reside in St. Louis until 1925. He then became active in the Taos art colony in Taos, New Mexico.