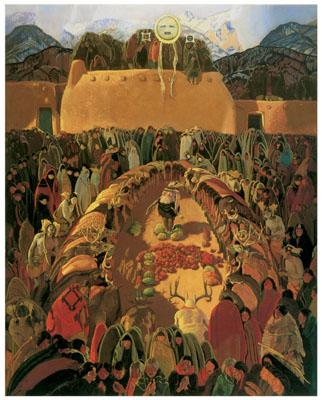 Ernest L. Blumenschein 1922 - This painting shows a celebration with hundreds of people gathered around a naked fat lady while food is at her feet and all others, including a host of animals, bow and their heads. Ernest L. Blumenschein 1913 - This painting shows three old Native American men standing out on a dry plain alongside a shirtless little boy holding a stick. Ernest L. Blumenschein (1874-1960) grew up in Dayton, Ohio, and initially trained as a violinist. He was a well known illustrator for magazines and books, including two short stories by Jack London. In 1897, during a Western trip, his horse-drawn wagon threw a wheel and he carried the wheel, for repairs, to the nearest town, which happened to be Taos, in the territory of New Mexico. Struck by the sweeping landscapes and the diverse Native American, Spanish-American, and American cultures of the region, he determined then and there to work as a painter. He was a cofounder of the Taos Society of Artists and part of the Taos art colony which from 1898 was an important part of the life of town. The style of painting of the Taos painters was to decisively influence the perceptions that the wider world came to have of the American Southwest, and specifically, of the Pueblo and Navajo Indian peoples.