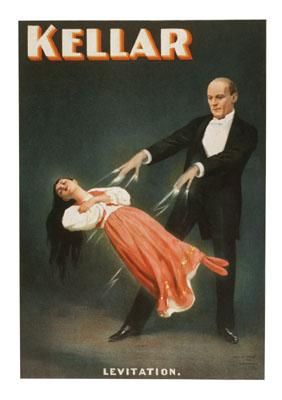 A man in a tuxedo holds out his hands suspending a girl with magic powers. Harry, Kellar (July 11, 1849?March 10, 1922) was an American magician who presented large stage shows during the late 1800s and early 1900s. Kellar was arguably the predecessor of Harry Houdini and the successor of Robert Heller. He was often referred to as the Dean of American Magicians and performed extensively on five continents. One of his most memorable stage illusions was the levitation of a girl advertised as the Levitation of Princess Karnack.