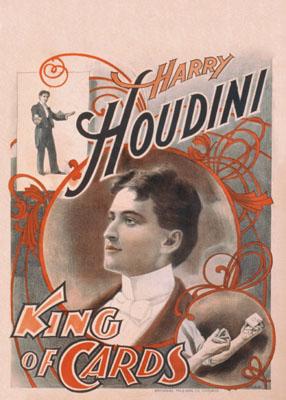 A picture of Houdini looking proud from the profile while a separate picture shows hands holding cards. Harry Houdini began his professional career at age 17 doing magic shows before civic groups, in music halls, at sideshows, and at New York?s Coney Island amusement park, where he sometimes performed 20 shows each day. For a time he worked with his brother Theo as The Houdini Brothers. This changed when Harry met Beatrice Raymond, a teenaged singer and dancer who was also attempting a career in show business. Harry and Bess married in 1894 and Bess joined the act as Harry?s new partner. (Theo started a solo career as a magician under the name Hardeen.) Harry and Bess remained devoted companions for the rest of his life. He depended on her to care for him and handle the necessities of life. Harry gave her the credit for his success, and developed the habit of writing her a love note every day.