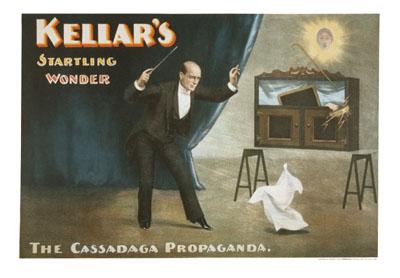 A bald man in tuxedo holds a wand levitating a white blanket while the poster read "Kellar's Starting Wonder, The Cassadaga Propaganda." Harry Kellar (1849-1922) was among the greatest magicians of all time. The trick featured on the image is of a cloth which, during a seance, would represnt the given form to a visiting spirit. Bells would ring, tambourines would jingle, and magic words and symbols would appear on a slate. The cloth would knot itself and then move around the stage.