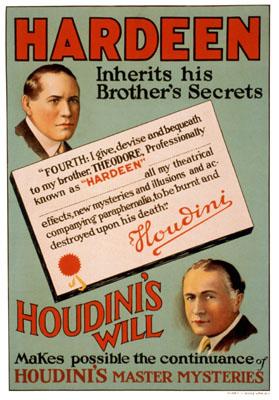 A picture depicts the will of Houdini passing off Hardeen to inherit his brothers secrets. Theodore Hardeen (1876-1945) was a magician and escape artist, best known as Harry Houdini's brother. So dedicated was he to Houdini that Hardeen usually introduced himself as the ?brother of Houdini." He was the founder of the Magician's Guild. He was born as Ferencz Dezso Weisz or Weisz Ferenc Dezso in Budapest, Hungary and went by the name of Theodore Weiss when the family was living in Appleton, Wisconsin.