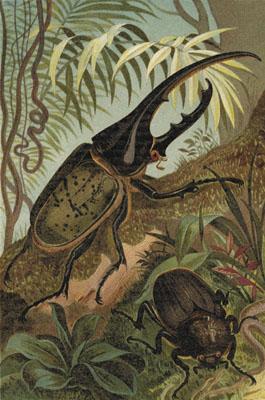 Hercules beetle is the most famous and largest of the rhinoceros beetle. It is native to the rainforests of Central America, South America, And the Lesser Antilles. Some males reach as large as 6.75 inches in length. It is most noted for its thoracic and cephalic horns, which can grow longer than the body of the beetle itself. It is said to be the strongest creature on earth for its size, able to carry 850 times its own body weight. Much of the life of the larva is spent tunneling through tis primary food source of rotting wood. Once emerging as an adult after one to two years it will roam the forest floor in search of decaying fruit.