Do The Spirits Come Back 2 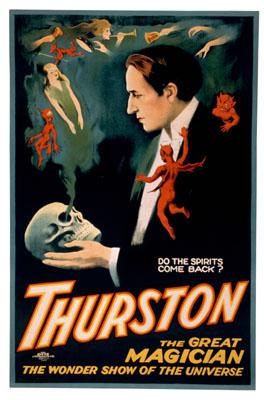 A solemn and focused man stands starring into the eyes of a skull while demonic and ghostly creatures fly all around him, reading "Thurston, The Great Magician, The Wonder Show Of The Universe." Howard Thurston (1869-1936) was the last of the great vaudevill magicians, and at one point even had two separate Thurston Shows touring and used ten railway baggage cars to transport scenery and equipment for illusions. Thurston was able to use Kellar's fame to catapult him into fame, while using little of his actual tricks, many of which he updated each year. One of his legendary tricks was to make an automobile filled with pretty assistants dissapear.