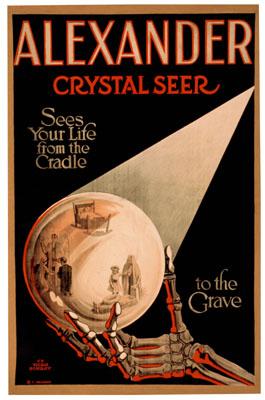 A skeleton hand holds up a crystal ball into the light depicting various scenes of drama. Alexander (1880-1954) was born Claude Alexander Conlin and was the highest paid magician of the time. In a relatively short period of a few years he earned over 4 million dollars. He specialized in mentalism and psychic reading acts while dressing in Oriental style robes and a feathered turban, often using a crystal ball. He wrote several books and also worked privately giving readings for clients. He retired in 1924 and was married over 7 times, possibly up to 11 times. He spent time in local jails and federal prison, went on trial for attempting to extort an oilman millionaire, made a failed attempt to out run authorities in a high powered speed boat loaded with bootlegged liquor and admitted killing four men.