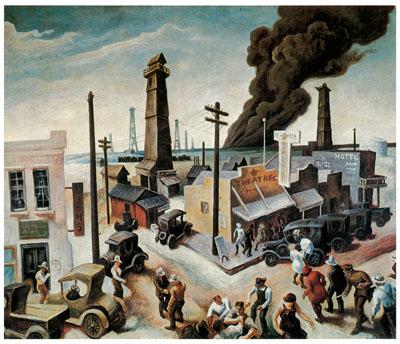 Thomas Hart Benton 1928 - This painting shows a small town on the verge of going to a big town with men out and about, cars zipping around, and smoke stacks in the distance. Thomas Hart Benton (1889-1975) was an American painter and muralist at the forefront of the Regionalist art movement. He was born into a powerful family of business men and politicians. He trained in paris, where he met Diego Rivera and Stanton Macdonald-Wright who influenced Benton's style as an advocate of Synchromism. During Word War 1 he painted camouflaged ships to make sure the designs where applied correctly. On return to New York in the early 1920s, Benton declared himself an "enemy of modernism" and began the naturalistic and representational work today known as Regionalism. He painted everyday people but did not sugar coat history and was criticized for including Ku Klux Klan members in full regalia.