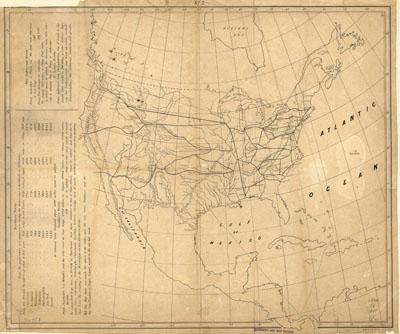 Map without title showing the railroad route to Santa Fe and San Diego; the central route through South Pass and on to San Francisco and "Puget's Sound," and connecting railroads east of the Mississippi. Whitney, Asa, 1797-1872. N[ew] Y[ork] Miller's Lith. [1849] Title from C. I. Wheat's Mapping the transmississippi west. Relief shown by hachures. From the author's A project for a railroad to the Pacific. Includes distance chart showing distances via Northern Route, Southern Route, Galveston Route, and St. Louis Route. Outline map of North America showing proposed railroad routes within the present limits of the United States. This is one of the earliest promotional maps for a transcontinental railroad to come before the United States Congress and claimed by the author to have been "conceived as early as 1830."