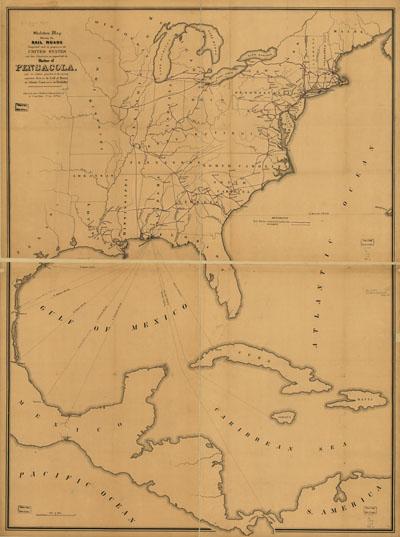 Skeleton map showing the rail roads completed and in progress in the United States and their connection as proposed with the harbor of Pensacola, and its relative position to the various important ports on the Gulf of Mexico, the Atlantic coast and in the West Indies. Prepared by order of the House of Representatives of the United States, 1st session, 30th Con. United States. Congress. House. [Washington? 1848] Hand colored. Outline map of the eastern half of the United States indicating drainage, state boundaries, major cities, and constructed and contemplated railroads. The southern portion of map indicates proposed shipping routes to points in the West Indies and Middle America. This is one of the earliest small-scale government maps to show a railroad network. [From published bibliography]