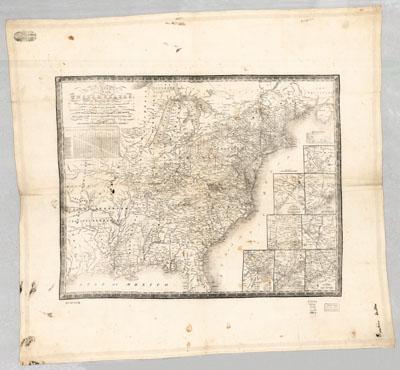 Mitchell's map of the United States : showing the principal travelling turnpike and common roads, on which are given the distances in miles from one place to another, also the courses of the canals & rail roads throughout the country, carefully compiled from the best authorities. Mitchell, S. Augustus (Samuel Augustus), 1792-1868. Philadelphia : S.A. Mitchell ; Shows longitude west from Greenwich and Washington. The paper edition of this map appears in Bishop Davenport's A New Gazetteer, or Geographical Dictionary of North America . . . (Philadelphia, 1836). [From published bibliography] Includes distance table below the title. Insets: Environs of Niagara Falls. Environs of Baltimore and Washington. Environs of Charleston. Environs of Hartford and New Haven. Environs of Albany. Environs of Boston. Environs of New York. Environs of Philadelphia.