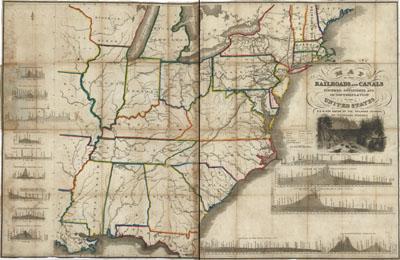 Map of the railroads and canals, finished, unfinished, and in contemplation, in the United States / drawn and engraved for D.K. Minor, editor of the Railroad Journal by William Norris. Norris, William, engraver. New York : Railroad Journal, 1834."August 1834." Relief shown by hachures. Shows a small portion of southern Ontario. A Includes 14 profiles of canals and railroads and ill. Important early map of the United States. Includes drainage, canals, and cities and towns. Contains route profiles for the Baltimore and Ohio Railroad, the Columbia Railroad, Pa., and the Massachusetts railroads.