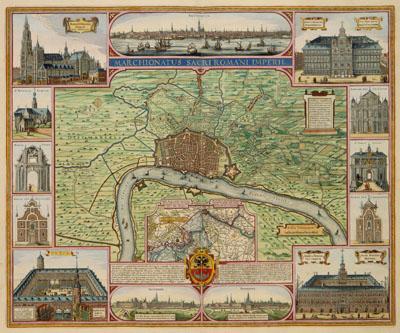 MARCHIONATUS SACRI ROMANI IMPERII, Claes Jansz. Visscher (1624)This particularly beautifully decorated map shows the city of Antwerp and surroundings and the most important buildings. The map was engraved and published by Claes Jansz. Visscher (1587-1652) in Amsterdam in 1624. Although the pictures of the churches and important monumental buildings suggest a touristic character, the map was probable published after some sieges of the city by Prince Maurits at the river Schelde in 1620 en 1624. Text in the inset with the course of the river Schelde emphasizes the military fortifications and the crucial role of the dikes around the city. The river Schelde appeared to be a strategic point when the city was besieged.